Dinosaur is a word that many people do recognize and know that there once were time in the past when a group of animals called dinosaurs did rule the Earth. The word has become very popular since it was first introduced by paleontologist Sir Richard Owen in 1842.

The popularity of dinosaurs may be due to that for many people dinosaurs seem to be fascinating because of their appearance and the huge sizes that some of them were able to grow. But even so many of these people do not actually know what a dinosaur really is, and what is not a dinosaur. The following text is here to tell about dinosaurs and what they are and what they are not.

In the mid 19th century Sir Richard Owen named a taxon Dinosauria to describe a group newly recognized prehistoric animals those remains had been unearthed all over the world.

The name "dinosaur" comes from Greek worlds deinos ("terrible," "potent," or "fearfully great") and sauros("lizard" or "reptile"). Owen did not name them as dinosaurs for a reason that they would be very terrifying and dangerous monsters, instead he wanted to refer their sheer size and and majesty.

Dinosaurs are a very diverse group of animals. Because they ruled the planed so long time they had had long time to adapt new environments and produce a huge array of different forms.

First of all, dinosaurs can be characterized as archosaurian reptiles with erect limbs. This means that dinosaurs held their limbs right beneath their body similar way as most modern mammals and unlike many reptiles that have limbs that sprawl out to either side (like lizards for example).

Dinosaurs can be defined as the most recent common ancestor of Iguanodon and Megalosaurus and all of its descendants. That is so because they were two of the three genera refered by Sir Richard Owen when he recognized this group of animals and named it "Dinosauria".

There is a list of certain features shared by dinosaurs and they can be used to determine what animals are dinosaurs and what are not. These characteristics are:

It is known today that birds are the descendants of theropod dinosaurs. In older taxonomy system they were considered as a separate group of animals that evolved from dinosaurs but the old classification system is not used anymore by modern paleontologists.

The term non-avian dinosaur is used to refer the non-bird dinosaurs (all dinosaurs that are not birds).

Some animals are confused with dinosaurs by general public who do not know what dinosaurs really are. Here is examples of some of them and this should help you to recognize that they are not dinosaurs.

The Mesozoic Era (Triassic, Jurassic and Cretaceous periods) is sometimes described as the "Age of dinosaurs", but to be honest dinosaurs did not appear until the Middle Triassic epoch (Nyasasaurus, could also be called for "Dinosaurus" as the first and ancestral to both major gruops of dinosaurs). However, Nyasasaurus lived from 245-230 million years, later times in early part of Late Triassic epoch in some 231 million years ago, those dinosaurs evolved into other dinosaurs, such as Eoraptor. It shows that those Nyasasauruses evolved leastly to both major groups of dinosaurs in that time.

The first dinosaurs were quite small and at that time they did not yet rule the lant. Instead the Pseudosuchians, relatives and ancestors of crocodilians were the rulers of the time.

Dinosaurs appeared about 5 million years after the great Permian–Triassic extinction event, the Great Dying, that killed most animal life at the end of the Permian period that was the time before Triassic when therapsids the ancestors and relatives of mammals ruled the land. Sice the extinction had been so devastating the ancestral archosaurs (that gave rise to pseudosuchians, dinosaurs and pterosaurs) were able to diversity during Triassic.

The dinosaurs became more diverse during the Late Triassic then many other archosaurs became extinct at that time. At the end of the Triassic there was a smaller extinction event that killed most pseudosuchians and other Triassic animals. In the following Jurassic and Cretaceous periods (135 million years) the dinosaurs were undoubtably the rulers of the land. During that time many different types of plant and meat eating dinosaur appeared. Their rule ended at the end of the Cretaceous when an extinction event killed all the dinosaurs except some birds.

In the following Cenozoic Era mammals ruled the world. During Cenozoic birds were and still are very numerous but most of them are quite small. 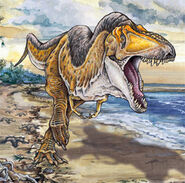 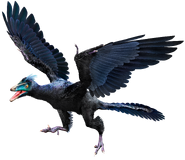 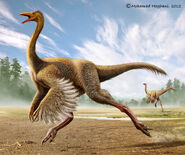 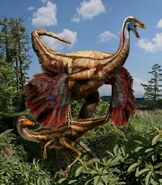 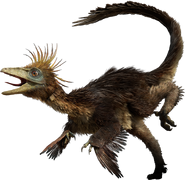 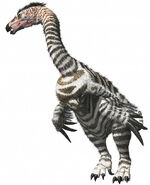 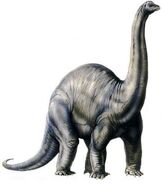 Add a photo to this gallery
Retrieved from "https://cooldinofacts.fandom.com/wiki/Dinosaur?oldid=10773"
Community content is available under CC-BY-SA unless otherwise noted.