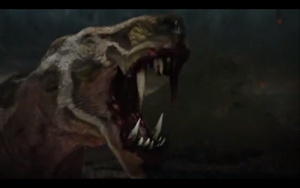 Inostrancevia (Named in honour of Russian geologist A. Inostrantzev) was a propably the largest of gorgonopsid therapsids. It lived during late Permian period about 260 to 254 million years ago in Russia and was the top predator of the ecosystem.

The total lenght of Inostrancevia was about 3.5 m and only the skull was 51 cm long. Like many other gorgonopsids, Inostrancevia was "saber-toothed" predator. It's upper canine teeth were 15 cm long and the animal also had large incisors. It had a slender body and quite short legs.

1/3
Community content is available under CC-BY-SA unless otherwise noted.
Advertisement